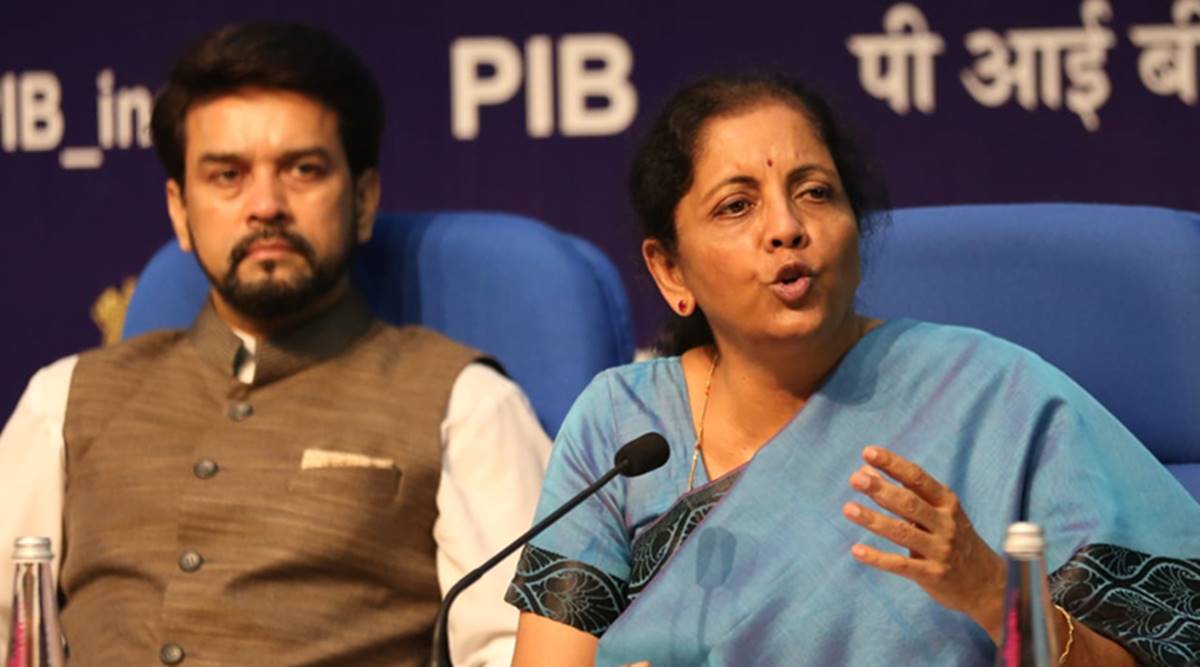 Government Gave the Full Account of More Than 20 Lakh Crores

Nirmala Sitharaman said that through the National Disaster Response Force (SDRF), more than 11 thousand crores have been released to the states in April itself. The Reserve Bank raised the state’s borrowing limit to 60 percent. States have taken 14 percent of their borrowing limit. 4,113 crore has been provided for anti-cavid activity through the Health Ministry. Nirmala Sitharaman said that the state’s gross domestic product (GSDP) has been increased from 3 to 5 percent.

Relieving MSME (micro, small and medium enterprises) that in the Corona crisis period, insolvency process will not be initiated against anyone for the next one year. To start the insolvency process, the loan limit has been increased from Rs 1 lakh to 1 crore.

Nirmala Sitharaman told that needy students who do not have internet can study themselves from the Prabha DTH service. Currently three such channels, 12 new channels will be added to it. Apart from this, e-content will be provided through initiation. A program called Manoradan will be run. At the same time, students of first to 12th grade will be given a new way of reading under One Class, One Channel. Radio, community radio will also be taken help in studies. Special educational material will be prepared for the differently-abled. 100 top universities have been allowed to study online.

– Changes in the health sector will increase public health investment. Such a capability will be prepared that we will be ready to fight even in an emergency. Preparations will be done to fight infection-related diseases in district-level hospitals. The lab network will be strengthened across the country. Public health labs will be set up in every block in rural areas.

– Nirmala Sitharaman told that 40 thousand crore rupees have been increased in the allocated amount under MNREGA. This will provide employment to migrant laborers. The first budget estimate under MNREGA was 61 thousand crores.

What did the poor do in the Corona era?

Nirmala Sitharaman said that under the PM Garib Kalyan Yojana, direct benefit transfer cash was made using technology. 10,225 crore has been added to the total 20 crore Jan Dhan accounts. Rupees have been transferred to 8.19 crore farmers’ account. He told that the government is providing immediate financial help to the poor and is providing food. Free cylinders have been delivered to the people under Ujjwala.

Nirmala Sitharaman held the first press conference on Wednesday. He announced a package of about 6 lakh crores. A large part of this package has been given to Micro, Small and Medium Businesses (MSME). At the same time, the government has also changed the definition of micro, small and medium businesses.

30,000 crore cash facility has been given to non-banking financial companies, housing finance companies, MFIs. Similarly, electricity distribution companies owe Rs 94,000 crore and they have been given bail out of 90,000 crore. In the press conference on Wednesday, Nirmala Sitharaman has given many relief to the middle class on the tax front too.

In Thursday’s press conference, Nirmala Sitharaman made 9 big announcements related to street-street traders, small farmers, migrant workers. During this, he said that a special loan of Rs 10 thousand will be given for 50 lakh street-trawlers. Similarly, the rebate on Shishu loan, deadline of credit linked subsidy scheme has been extended.

Apart from this, big announcements were made for the urban homeless, such as cheap house, rental house, three-time meal, farmer credit card. According to Finance Minister Nirmala Sitharaman, 2.5 crore farmers will get loans up to Rs 2 lakh crore on credit cards. Apart from this, One Nation, One Card scheme will be implemented across the country by March 2021.

What Did You Get on Friday

This press conference of Nirmala Sitharaman was entirely farmer-centric. During this, 11 announcements were made for the agriculture sector. In this, 8 decisions were related to agriculture and infra, while 3 decisions are about governance and reform. The government has announced to give one lakh crore rupees for agricultural infrastructure. During this time an important decision was taken regarding the change in the Essential Commodities Act 1955. Now grains, oilseeds, onions, potatoes, etc. will be freed from this act.